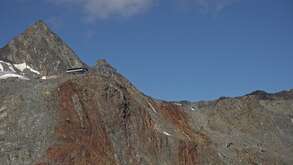 1981
January: three weeks closed due to avalanche danger, thus building works of the parallel lift is delayed; enormous demand at Easter; building and operation start of the section I lift and the Gamsgarten double chairlift in early summer; Marchlahn avalanche galleries finished; Grabanock damn completed; Ochstallahm avalanche gallery finished – all without support of the public hand.
Number of persons transported by lift: 563,350.

1982
Year of recession in Austrian tourism – our sales volume rises by 10%. The investments made in 1979/80 proved to be right. Raffeine avalanche gallery finished.

1983
Initiative of the Wintersport Tirol AG against the building of a ÖBB power plant which would have ruined one of the most beautiful waterfalls of the valley. With legal support by Dr. Bernhard Heitzmann we succeed in having the big waterfalls of the valley placed under a protective order! May: operation of the Fernau sewage plant starts; first step of the realisation of a sewage system.
Persons transported by lift: 666,794.

1985
Excellent winter. Completion of the canalisation and the Fernau sewage plant. Building of the Jochdohle at Gaiskarjoch, 3,150m.
Transported persons: 752,751.Stubai bed nights: 1,664.826.

1986
Opening of the Gamsgarten restaurant. Building of the Daunferenr T-bar lift – the highest located building site of the Tyrol.

1987
Franz Wegscheider advances to the management. He is responsible for the finances of the company. Good results in spring. Flooding catastrophes in July and August. Massive damage to our road and in the area of the base station. 24 closing days due to flooding. Record result in December.
Persons transported: 701,591.