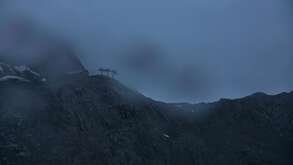 1990
Neustift has more than a million bed nights for the first time! Struggling for getting concessions for rebuilding the section I and II lifts: long waiting times at the valley station during peak times; the Neustift municipal council objects; plenty of efforts required for convincing the council; polemics by green politicians; After senseless delay we eventually receive the concession for building a second lift in 1990. Bare brickwork for the base station of the lift finished.

1991
Again a top winter season. We are still waiting for the concession under nature protection law for the new lift. Waiting times at the base station increase dramatically. New: Gamsgarten exercise lift. Building of the sewage canal from the mid-station to the base station. Planning of a joint sewage plant for the glacier lifts, the Alpine Club, the agricultural association and Hotel Mutterberg.
Persons transported: 951,929.Stubai bed nights: 1,841,560.

1992
Because of a demand of the Neustift tourist board to reduce capacity, ski pass prices had to be considerably increased. Despite a reduction in guests, profits were increased. – In December eventually the new lift starts operating! 4.5km-long high altitude cross-country skiing track at Eissee (exercise track for professional Nordic skiers and also for our guests).

1995
Renewing of the two sections of the Eisgratbahn lift.
Opening of the Gamsgarten restaurant (architect Heinz Pedrini).
FIS-giant slalom and Super G of the Men.

1996
The offer is extended by seven pistes, the snowboard terrain park and the area for children. Seminars on customer orientation for our personnel. We back the foundation of the “Für’s Stubai” association (a club to promote products by local farmers) including farmers’ market and petting zoo. Our restaurants get all products that are available in the Stubai from the valley. The world’s highest open air organ concert on the 70th anniversary of Dr. Klier.

1997
In the summer hikes on the glacier path (with crevasse) to Jochdohle for the first time. – The Windachferner exercise lift is replaced by a T-bar lift. Waldlehner avalanche barriers. Opening of the “Zur Goldenen Gams” restaurant with gala menu made by the toque-awarded chefs Eckart Witzigmann, Jörg Wörther and Hans Haas. – Prizes for best lift brand of the Tyrol, seal of quality for pistes and seal of quality for snowboarding.

1998
Dr. Waizer dies on a skiing excursion on the Stubai Glacier at the age of 84. Dr. Klier becomes the new president of the management board.
Operation start of the Eisjoch 6-seater lift, Austria’s first six-seater chairlift with pillars in glacier ice! 25-year operation anniversary with inauguration of the Eisjoch six-seater chairlift – live concert by Wolfgang Ambros.
New challenges within the scope of climatic change and the rise of the permafrost line: Electric cables of the Daunferner T-bar lift tear, the Wildspitzgrat ridge moves on a length of 100 metres. The Daunferner T-bar lift is relocated, climatic warming forces us to stop skiing operation in high summer. Persons transported: 1,067.239

1999
Heavy snowfall from February. 15 closing days due to avalanche danger and six due to storm.
Record result for the Eisjoch six-seater chairlift: With a total of 2,089.890 transported persons this lift is Austria’s most frequented lift. – In December operation of the Pfaffengrat double chairlift starts.